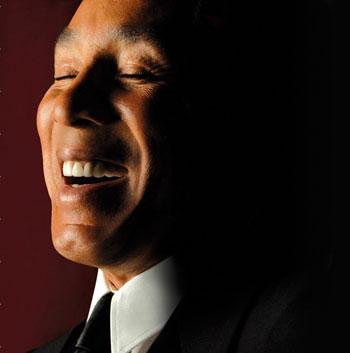 Barry Murphy returns once more to trawl the TV and radio guides (so you don't have to), finding anything worth tuning into this week. All listings are for UK terrestrial TV, Freeview and national radio, with the shows running from Friday 23rd October to Thursday 29th October 2009.

Soul legend Smokey Robinson is in town this week, and all over the media, as he takes to the Roundhouse stage in London for a celebration of the 50th Anniversary of the birth of Motown records. His performance on last Tuesdays edition of Later… proved that the great man is still in fine voice and his concert BBC Electric Proms: Smokey Robinson (Radio: BBC Radio 2. Saturday 24th, 8pm and TV: BBC 2. Sunday 25th, 11pm) featuring his band and the BBC Concert Orchestra, with specially commissioned new arrangements of his most cherished hits, promises to be the highlight of this years Electric Proms season. Smokey also features on Later… with Jools Holland (BBC 2. Friday 23rd, 11.35pm), is the special guest of Paul Gambaccini (BBC Radio 2. Saturday 24th, 9.15pm) and talks to actor and Motown fan Martin Freeman on The Culture Show (BBC 2. Thursday 29th, 7pm).

BBC 4's Friday music strand this week is devoted to Krautrock. Documentary Krautrock: the Rebirth of Germany (Friday 23rd, 9pm & 1.25am and Saturday 24th, 11.30pm & 1.30am) looks at how a radical generation of musicians created a new German musical identity out of the cultural ruins of war. Between 1968 and 1977 bands like Neu!, Can, Faust and Kraftwerk would look beyond western rock and roll to create some of the most original and uncompromising music ever heard. They shared one common goal – a forward-looking desire to transcend Germany's gruesome past – but that didn't stop the music press in war-obsessed Britain from calling them Krautrock. Also showing is Kraftwerk: Minimum-Maximum (Friday 23rd, 10pm and Saturday 24rd, 12.30am), a compilation of performances by the electronic band, filmed during a 2004 world tour and featuring songs including Autobahn and Radioactivity.

Kraftwerk: Minimum-Maximum – BBC 4. 10.00pm – 11.00pm
New. A compilation of performances by the electronic band, filmed during a 2004 world tour and featuring songs including Autobahn and Radioactivity.

Film: The Stepford Wives (1975) – ITV 3. 10.00pm – 12.25am
Sci-fi horror starring Katherine Ross. When liberated wife Joanna Eberhart moves to the suburb of Stepford with her husband, she is shocked by the subservience of the other wives.

Peep Show (6/6) – Channel 4. 10.00pm – 10.30pm
Series six. New. Worried that Jeff is muscling in on his fatherly duties, Mark decides to learn to drive so he can take Sophie to hospital when the baby is due.

The Thick of it (1/8) – BBC 2. 10.10pm – 10.40pm
New. Series Three. Armando Iannucci's excoriating political comedy returns on the day of the reshuffle at Number Ten. And with everyone else turning down the job at the Department of Social Affairs and Citizenship, Malcolm Tucker has no option but to promote rank outsider Nichola Murray.

Krautrock: the Rebirth of Germany – BBC 4. 11.30pm – 12.30am (Repeated 1.30am – 2.30am GMT)
Documentary examining how radical German bands, known as Krautrockers in the music press, developed a new musical identity that influenced many British bands.

Kraftwerk: Minimum-Maximum – BBC 4. 12.30am – 1.30am
New. A compilation of performances by the electronic band, filmed during a 2004 world tour and featuring songs including Autobahn and Radioactivity.

The Ghost Ship (1943) – BBC 2. 2.00am – 3.05am
Creepy horror starring Richard Dix. A ship's commanding officer starts behaving strangely. The rarest of the Val Lewton's horror films, a stolen story and a subsequent lawsuit against the film has meant that it remains unseen by many people. Worth setting the recorder for.

BBC Electric Proms: Smokey Robinson – BBC Radio 2. 8.00pm – 9.15pm
Detroit-born singer/songwriter Smokey Robinson performs live with the BBC Concert Orchestra. The programme features new arrangements of Robinson's Motown classics with the Miracles as well as solo work, including his new album. Robinson left the Miracles in 1972, having sung lead on defining Motown hits such as Shop Around, You've Really Got a Hold on Me, I Second That Emotion and The Tears of a Clown. With Paul Gambaccini, whose interview with Robinson follows.

The South Bank Show – ITV 1. 10.15pm – 11.15pm
Nick Hornby. The writer's new novel, Juliet, Naked, is his first set outside North London. Also about to be released is the film An Education, for which he wrote the screenplay. He talks to Melvyn Bragg.

Smokey Robinson: Electric Proms – BBC 2. 11.00pm – 12Midnight
Highlights of Smokey Robinson's celebrations of 50 years of Motown at London's Roundhouse. Including classic songs and new material, the American soul legend and his band are joined by the BBC Concert Orchestra.

Inside Antiques – BBC 4. 7.30pm – 8.00pm
Beginning an evening of Age of Glamour programmes, Lars Tharp explores the age of Art Deco, which first sprang to life at the end of the First World War and captured the optimism and forward-thinking of the period. Lars takes a closer look at risque ivory and discovers what the Moulin Rouge, Tutankhamun and tennis all have in common.

Glamour's Golden Age (2/3) -BBC 4. 9.00pm – 10.00pm
New. Exploring the decades between the First and Second World Wars, when a cultural revolution in music, fashion and the arts occurred. Narrated by Hermione Norris.

Film: Mrs Pollifax – Spy (1970) – Channel 4. 3.15am – 5.05am
Spy parody directed by Leslie H. Martinson, director of the 1966 Batman movie, with a score by Lalo Schifrin and starring Rosalind Russell. When widow Emily volunteers for the CIA, she winds up in prison.

Ghosts in the Machine – BBC 4. 9.00pm – 10.00pm
New. A look at the history of supernatural programmes on British television, examining such classic ghost stories as Whistle and I'll Come to You. With contributions by Bill Paterson, Sarah Greene and Yvette Fielding.

Baroque and Roll: Townshend on Purcell – BBC Radio 4. 1.30pm – 2.00pm
Rock star Pete Townshend reveals that the Baroque composer Henry Purcell has long influenced his songwriting for the Who and other projects. He tells how he was inspired by Purcell's dramatic genius for his most intriguing compositions, including Tommy.

The Thick of it (1/8) – BBC 4. 11.30pm – 12Midnight
New. Series Three. Armando Iannucci's excoriating political comedy returns on the day of the reshuffle at Number Ten. And with everyone else turning down the job at the Department of Social Affairs and Citizenship, Malcolm Tucker has no option but to promote rank outsider Nichola Murray.

Film: Richard Pryor: Live on the Sunset Strip (1982) – ITV 4. 11.55pm – 1.35am
A typically ribald stand-up performance by the influential comedian, recorded at the Hollywood Palladium at the height of his fame in 1982.

Reece Shearsmith's Haunted House (1/2) – BBC Radio 4. 11.30am – 12Mid-day
An Appointment with Fear. In the run-up to Halloween, Reece Shearsmith hosts an energetic, witty discussion on horror in front of an audience at the reputedly haunted Sutton House in Hackney. Joined by horror enthusiasts Mark Gatiss, Vic Reeves and Yvette Fielding, he examines classic scary moments from British radio and TV, and explores the ingredients of a classic horror story.

Radio 2 Live: David Bowie – BBC Radio 2. 11.00pm – 12Midnight
To celebrate 75 years of the BBC's Maida Vale studios, a chance to hear David Bowie live at the studios from 2002. With songs from the then new album Heathen, plus live rarities such as The Bewlay Brothers and Alabama Song.