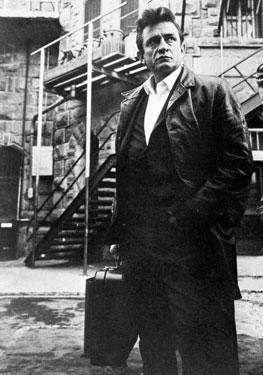 Barry Murphy returns once more to trawl the TV and radio guides (so you don't have to), finding anything worth tuning into this week. All listings are for UK terrestrial TV, Freeview and national radio, with the shows running from Friday 27th November to Thursday 3rd December 2009.

BBC 4 this week pays tribute to the original Man in Black, Johnny Cash with a night of programming devoted to this American legend. The documentary Johnny Cash at Folsom Prison (Friday 27th, 9pm. Repeated Sunday 29th, 12.20am ) explores, arguably, the most important day in his career. Cash's concert at Folsom State Prison in California in January 1968 touched a raw nerve in the American psyche and made him a national hero at a troubled time in American history. Using the stark images of rock photographer Jim Marshall, graphic techniques, archive footage and interviews with Merle Haggard, Cash's daughter Rosanne, band members Marshall Grant and WS 'Fluke' Holland, alongside former inmates of the prison, the film documents this explosive concert, the live album that followed and a transformative moment in the lives of Cash, the inmates of Folsom Prison and the American nation in the troubled year of 1968.

Also on BBC 4 this week, Jonathan Miller's adaption of the MR James ghost story Whistle and I'll Come to You (Tuesday 1st, 11.30pm) gets a rare screening. Part of the Beeb's 'A Ghost Story For Christmas' series,  this short 1968 black and white film has a doom laden atmosphere that slowly builds into a genuinely creepy and unsettling conclusion, and was voted among Channel 4's 100 most scary moments.
Friday 27th November

Johnny Cash: The Last Great American – BBC 4. 12.30am – 1.30am
A look back at the life and times of the influential singer/songwriter who left a legacy of more than 1,500 songs, including Folsom Prison Blues and I Walk the Line, and was discovered by a new, youthful audience in the 1990s.

Film: Duel (1971) – ITV 1. 1.50am – 3.05am
Steven Spielberg's menacing thriller starring Dennis Weaver. Travelling salesman David Mann is used to driving long distances, but on an isolated stretch of road he encounters a smoke-spewing ten-ton tanker truck whose sole purpose seems to be to crush him and his car.

TV  The Thick of it (6/8) – BBC 2. 10.10pm – 10.40pm
New. Series Three. Malcolm Tucker is minding the shop while the Prime Minster's away at a summit in Spain. Unfortunately, just as Nichola is about to unveil her Forth Sector Initiative, the media starts looking for someone to launch another leadership contest. Does the Secretary of State have what it takes?

Dirty Dali: a Private View – More4. 11.25pm – 12.30am
Art critic Brian Sewell presents an intimate portrait of Salvador Dali, the most popular of all surrealist painters, but also a deeply troubled man torn by ambiguous sexuality and Freudian confusion.

Film: Beyond the Sea (2004) – Channel 4. 1.00am – 3.15am
Musical biographical drama that charts the life of singer Bobby Darin, directed and starring Kevin Spacey. After surviving a life-threatening childhood illness, a young man sets out to become a star.

The Songs the Beatles Gave Away – BBC Radio 2. 10.00pm – 11.00pm
Bob Harris showcases Beatles songs made popular (or not) by others singers or pop acts. Recipients of the Beatles' midas touch include Billy J Kramer, Mary Hopkin, the Fourmost, Jackie Lomax, Doris Troy and others. Plus, the theme tune for the 1968 TV series Thingumybob starring Stanley Holloway and music from Ray Boulting's 1966 film The Family Way. The programme features newly recorded recollections and anecdotes by producer George Martin, Cilla Black, Billy J Kramer, Mary Hopkin, Johnny Gentle – whom the Beatles backed on his 1960 tour – and the Fourmost's Billy Hatton. Plus archive input from George Harrison.

Film: A Man Called Horse (1970) – BBC 2. 12.00am – 1.50am
Brutal western starring Richard Harris. Captured by a tribe of Sioux, English aristocrat Lord John Morgan integrates himself with the tribe.

Film: Thunderbolt and Lightfoot (1974) – Five. 10.45pm – 12.55am
Irreverent crime drama starring Clint Eastwood and Jeff Bridges. A crook teams up with a drifter in a desperate bid to outrun his former partners-in-crime, who believe that he knows the location of the loot from their last robbery together.

Film: Carry On Doctor (1968) – Channel 4. 1.35pm – 3.25pm
Comedy starring Frankie Howerd, Sidney James and Kenneth Williams. Francis Bigger is a notorious charlatan who tours the country lecturing on the subject of mind over matter. During one of his performances he falls off the platform and is taken to the chaotic local hospital.

Film: Please Sir! (1971) – Film4. 3.05pm – 5.05pm
Spin-off from the TV sitcom. When the pupils from Fenn Street School get the chance to go on a trip to the countryside, Bernard Hedges (John Alderton) makes sure his class is included despite his colleagues' disapproval. Classic British romp featuring Duffy, Frankie Abbott, Maureen & the gang. With a groovy theme song from Cilla.

Auf Wiedershen, Pet – ITV 4. 9.00pm – 11.10pm
Double bill of the classic comedy drama. Work at Thornley Manor is over and the lads take a break.

Ghosts in the Machine – BBC 4. 10.30pm – 11.30pm
A look at the history of supernatural programmes on
British television, examining such classic ghost stories as Whistle and I'll Come to You. With contributions by Bill Paterson, Sarah Greene and Yvette Fielding.

Film: The Blues Brothers (1980) – ITV 4. 11.10pm – 1.50am
Cult musical comedy starring John Belushi and Dan Aykroyd as brothers Jake and Elwood Blues, who reform their band to raise money for their old orphanage, which is threatened with closure. Featuring a cast of r 'n' b heroes including Cab Calloway, James Brown, Aretha Franklin, Steve Cropper and Duck Dunn.

Whistle and I'll Come to You – BBC 4. 11.30pm – 12.15am
Jonathan Miller's masterful and truly unsettling adaption of the ghost story by MR James.

The Man Behind the Masquerade – BBC 4. 9.00pm – 10.00pm
New. The Modern Beauty season continues with the remarkable story of artist Kit Williams, who became famous for the illustrated book Masquerade, which gave clues to a hidden treasure, but lost his artistic credibility in the process.

The Thick of it (6/8) – BBC 4. 11.25pm – 11.55pm
Series Three. Malcolm Tucker is minding the shop while the Prime Minster's away at a summit in Spain. Unfortunately, just as Nichola is about to unveil her Forth Sector Initiative, the media starts looking for someone to launch another leadership contest. Does the Secretary of State have what it takes?

The House That Jazz Built – BBC Radio 4. 11.30am – 12mid-day
Celebrating 50 years of Ronnie Scott's Jazz Club, Paul Merton explores the origins of the famous venue and examines its impact on the world of music. Recorded on location at the club, the programme features interviews with leading jazz artists Salena Jones, Ian Shaw, Jay Phelps and James Pearson and features music and archive from personalities associated with the venue.