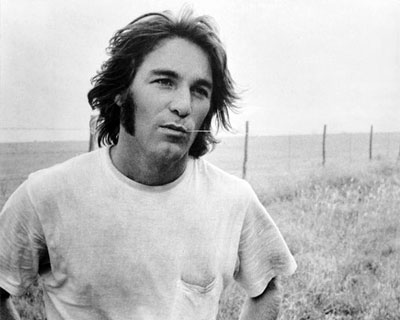 Barry Murphy returns once more to trawl the TV and radio guides (so you don't have to), finding anything worth tuning into this week. All listings are for UK terrestrial TV, Freeview and national radio, with the shows running from Friday 26th February to Thursday 4th March 2010.

Dennis Wilson was the drummer in the Beach Boys. And he was the real Beach Boy. In a band of geeks who sang about surfing, cars and girls, Dennis was the only one who surfed, the one who drove hot rod cars in competition and the one who got all the girls.

He was married five times, shared a house with Charles Manson (with whom he wrote songs, including one recorded by the Beach Boys) but died, ironically by drowning, at the age of 39. He was also the first Beach Boy to release a solo album, the stunning Pacific Ocean Blue, which after years of being out of print and fetching hundreds on Ebay, was re-released in 2009 to widespread acclaim, being voted No 1 Reissue of the Year by Mojo and Uncut magazines.
Documentary Legends: Dennis Wilson – the Real Beach Boy (BBC 4. Friday 26th, 9pm. Repeated 12.20am) tells the story of Dennis's life and music, with unseen archive footage and original interviews with Beach Boys Al Jardine and David Marks, his sons Michael and Carl and many friends and fellow musicians. These include Taylor Hawkins, drummer with the Foo Fighters who provided a vocal for the lost track on Pacific Ocean Blue, Holy Man, for which Dennis never laid down a vocal when he recorded the song in 1977.

Also this week: Modculture regular Stacie Stewart continues in the heats of this year's Masterchef (BBC 1. Friday 26th, 7.30pm) to secure her place in the semi-finals. Best of luck Stacie!

Masterchef – BBC 1. 7.30pm – 7.55pm
Modculture regular Stacie Stewart continues through the heats of this years series to secure her place in the semi-finals. Best of luck Stacie!

Legends: Dennis Wilson – the Real Beach Boy – BBC 4. 9.00pm – 10.00pm (Repeated 12.20am)
New. Documentary exploring the career of the former drummer, who enjoyed success in the 1960s with the Beach Boys and released solo album Pacific Ocean Blue – before his life was cut short when he drowned in 1983 at the age of 39. The programme features archive footage and interviews with fellow band members Al Jardine and David Marks, and Foo Fighters star Taylor Hawkins.

Pet Sounds: Brian Wilson Live in London – BBC 4. 10.00pm – 11.00pm
The singer/songwriter and his ten-piece band are captured in concert at London's Royal Festival Hall performing hits such as Wouldn't it Be Nice, Sloop John B, God Only Knows and I Just Wasn't Made for These Times as they re-create the sounds of the Beach Boys' classic 1966 album.

Imagine… Beautiful Dreamer: Brian Wilson's Smile – BBC 4. 11.00pm – 12.20am
Documentary focusing on the creative genius behind the Beach Boys and the abandoned 1960s album which was finally re-recorded and released by Wilson in 2004. The songwriter, whose music influenced the beetles, Bacharach and Bernstein, also talks candidly about his use of LSD and his troubled relationship with his father.

Heroes of Comedy – More4. 11.15pm – 12.20am
A profile of Peter Cook, who founded the beyond the Fringe satirical group and formed a comedy partnership with Dudley Moore.

Rise Up: Reggae Star – BBC 4. 10.30pm – 11.30pm
New. Documentary following three aspiring reggae musicians in Jamaica as they fight to rise up out of obscurity, attempting to forge a successful career for themselves in a society abundantly rich in talent but poor in opportunity.

Newswipe with Charlie Brooker (6/6) – BBC 2. 11.20pm – 11.50pm
Terrestrial repeat of the most recent series. The acid-tongued TV critic takes a caustic look at the way the news is covered in the media.

Skippy: Australia's First Superstar – BBC 4. 8.00pm – 9.00pm (Repeated 12.10am)
After its initial domestic airing in the late 1960s, 128 countries bought the rights to air Australian children's TV series Skippy the Bush Kangaroo. This documentary discovers the tremendous impact the programme had on its young viewers, while surviving cast members discuss their experience of working with the show's stars.

Paws, Claws and Videotape – BBC 4. 9.00pm – 10.00pm (Repeated 1.10am)
New. Hugh Dennis meets the human co-stars of the animal kingdom's most popular entertainers, discovering what it was like to work with the likes of Flipper, Skippy, Lassie and Clarence the Cross-eyed Lion.

Film: The Lives of Others (2006) – BBC 4. 10.00pm – 12.10am
Drama starring Ulrich Muhe, Sebastian Koch and Martina Gedeck. In 1980s East Berlin, a devoted Stasi agent is ordered to bug the apartment of a socialist playwright who is suspected of disloyalty to the state. In German with subtitles.

Mad Men (5/13) – BBC 2. 12.10am – 12.55am
Series three. The Fog. Betty goes to the hospital to give birth, but experiences strange dreams when she is placed under anaesthetic. Duck tries to lure Pete and Peggy to his new firm.

Film: The Lives of Others (2006) – BBC 4. 1.45am – 4.00am
Drama starring Ulrich Muhe, Sebastian Koch and Martina Gedeck. In 1980s East Berlin, a devoted Stasi agent is ordered to bug the apartment of a socialist playwright who is suspected of disloyalty to the state. In German with subtitles.

Paws, Claws and Videotape – BBC 4. 10.00pm – 11.00pm
New. Hugh Dennis meets the human co-stars of the animal kingdom's most popular entertainers, discovering what it was like to work with the likes of Flipper, Skippy, Lassie and Clarence the Cross-eyed Lion.