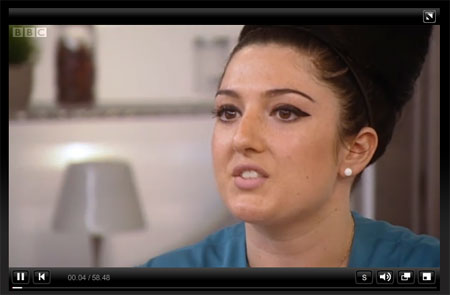 Barry Murphy returns once more to trawl the TV and radio guides (so you don't have to), finding anything worth tuning into this week. All listings are for UK terrestrial TV, Freeview and national radio, with the shows running from Friday 26th March to Thursday 1st April 2010.

This week, Modculture regular Stacie Stewart (above) continues in her quest to be this year's Masterchef winner with the first of the semi-final heats starting Friday 26th, BBC 1, 7.30pm.

Also, in Archive on 4: Sculptress of Sound: the Lost Works of Delia Derbyshire (Radio 4. Saturday 27th, 8pm) the broadcaster Matthew Sweet travels to The University of Manchester – home of Derbyshire's private collection of audio recordings – to learn more about the wider career and working methods of the woman who realised Ron Grainer's original theme to Doctor Who. Delia's collection of tapes was, until recently, in the safekeeping of Mark Ayres, archivist for the BBC Radiophonic Workshop. Matthew meets up at Manchester University with Mark, along with Delia's former colleagues from the BBC Radiophonic Workshop, Brian Hodgson and Dick Mills – plus former 'White Noise' band member David Vorhaus – to hear extracts from the archive, discuss their memories of Delia and the creative process behind some of her material.

Her realisation of the Doctor Who theme is just one small example of her genius and Sweet demonstrates how the music was originally created as well as hearing individual tracks from Delia's aborted 70's version. We'll also feature the make up tapes for her celebrated piece 'Blue Veils and Golden Sands', and hear Delia being interviewed on a previously 'lost' BBC recording from the 1960s. Matthew's journey of discovery takes in work with the influential poet Barry Bermange, as well as her 1971 piece marking the centenary of the Institution of Electrical Engineers.This Archive on 4 is brought up to date with an individual track from 'The Dance' from the children's programme 'Noah'. Recorded in the late 1960s this remarkable tape sounds like a contemporary dance track which wouldn't be out of place in today's clubs.

Masterchef – BBC 1. 7.30pm – 8.00pm
Modculture regular Stacie Stewart returns to the show for the first of the semi-finals.

Synth Britannia – BBC 4. 9.00pm – 10.30pm (Repeated 1.30am)
An examination of the musical backdrop of the 1980s when synthpop was all the rage, having been popularised by bands including Depeche Mode, Ultavox and Soft Cell. This documentary also studies how this genre influenced the future of electronic music and groups such as Pet Shop Boys and New Order.

Heroes of Comedy – More4. 11.10pm – 12.15am
A celebration of the life and work of Scottish comic actor Alastair Sim, who starred in the original St Trinian's films. With contributions from George Cole.

Skippy: Australia's First Superstar – BBC 4. 12.30am – 1.30am
After its initial domestic airing in the late 1960s, 128 countries bought the rights to air Australian children's TV series Skippy the Bush Kangaroo. This documentary discovers the tremendous impact the programme had on its young viewers, while surviving cast members discuss their experience of working with the show's stars.

The Professionals – ITV 4. 7.00pm – 8.00pm
Doyle is approached by a woman desperate to prove her father is innocent of murder.

Auf Wiedersehen, Pet – ITV 4. 9.00pm – 11.10pm
Double bill of the classic comedy. Series one. The lads are forced to take in a well-known British troublemaker under their collective wing.

Film: Rosemary's Baby (1968) – Film4. 11.25pmGMT – 3.10amBST
Mia Farrow stars in Roman Polanski's horror as the wife of John Cassavetes who becomes pregnant but discovers that the true father may be not of this world.

Film: The Yakuza (1975) – ITV 1. 12.35amGMT – 3.35amBST
Thriller starring Robert Mitchum as a former soldier summoned to Japan by a wealthy shipping magnate. He discovers the man's daughter is being held hostage by the Yakuza, the Japanese equivalent of the Mafia.

Never before in the History of Motion Pictures – BBC Radio 4. 10.30am – 11.00am
Patrick Humphries presents an affectionate look at the history of movie trailers from their early beginnings as simple slides into the spectacular special effect-filled fanfares of today. With contributions from Michael Winner, Karen Krizanovich and actress Adjoa Andoh.

Archive on 4: Sculptress of Sound: the Lost Works of Delia Derbyshire – BBC Radio 4. 8.00pm – 9.00pm
Matthew Sweet celebrates the life and work of Delia Derbyshire, the composer best known for her association with the BBC Radiophonic Workshop and in particular her electronic realisation of Ron Grainer's theme music for Doctor Who. Sweet is guided by some of the composer's colleagues and friends through her music, some of which has not been heard in decades.

Reasons to be Cheerful: Ian Dury and the Blockheads – BBC Radio 2. 10.00pm – 11.00pm
Ten years after his death, Radio 2 celebrates the career of the disabled-art-teacher-turned-rock/punk/funk singer. Presented by Andy Serkis.

Paul Merton's Weird and Wonderful World of Early Cinema – BBC 4. 9.00pm – 10.00pm
New. The comedian investigates the early days of screen comedy in the silent cinema that developed before the First World War – not in Hollywood, but in Britain and France.

Film: McVicar (1980) – ITV 4. 10.05pm – 12.20am
Prison drama starring Roger Daltrey. A prisoner is transferred to Durham prison, where he battles to improve the treatment of himself and his fellow inmates while also planning his escape.

Film: The King of Comedy (1983) – BBC 2. 1.20am – 3.05am
Caustic comedy drama starring Robert De Niro and Jerry Lewis. Rupert Pumpkin's cherished ambition is to become America's top stand-up comedian, despite the fact he has no talent.

Paul Merton's Weird and Wonderful World of Early Cinema – BBC 4. 7.30pm – 8.30pm
The comedian investigates the early days of screen comedy in the silent cinema that developed before the First World War – not in Hollywood, but in Britain and France.

Film: Happy Go Lucky (2007) – Film4. 9.00pm – 11.20pm
Drama directed by Mike Leigh, starring Sally Hawkins. Chirpy and irrepressible London primary school teacher Poppy decides to take driving lesso
ns when her bike is stolen. This brings her into contact with instructor Scott, whose stressed and bigoted outlook on life couldn't be more different to her own.

Film: The Blues Brothers (1980) – ITV 4. 11.00pm – 1.40am
Cult musical comedy starring John Belushi and Dan Aykroyd as brothers Jake and Elwood Blues, who reform their band to raise money for their old orphanage, which is threatened with closure. Featuring a cast of r 'n' b heroes including Cab Calloway, James Brown, Aretha Franklin, Steve Cropper and Duck Dunn.

Film: How to Steal a Million (1966) – Channel 4. 1.05pm – 3.25pm
Manic 'Swinging' crime comedy starring Audrey Hepburn and Peter O'Toole. A wealthy forger gives an imitation work of art to a Paris museum for exhibition. But his daughter is concerned that it will be quickly recognised as a fake.

Behind the Brel: the Story of a Musical Genius (3/3) – BBC Radio 2. 11.30pm – 12Midnight
Marc Almond explores the life and music of dramatic Belgian singer/songwriter Jacques Brel, who died of lung cancer in 1978, aged 49, and who remains a cult rather than mainstream figure partly because he wrote and sang only in French.

Film: American History X (1998) – ITV 4. 10.00pm – 12.25am
Powerful social drama starring Edward Norton and Edward Furlong. A white supremacist recently released from jail sees the error of his ways and tries to rid his younger brother of his racial prejudices.

Oliver Postgate – a Life in Small Films – BBC 4. 10.45pm – 11.45pm
The life and work of Bagpuss and Clangers creator Oliver Postgate, with contributions from the animator's family and his colleague Peter Firmin.
Radio

Film: This is England (2006) – Film4. 9.00pm – 11.00pm
Shane Meadows' drama set during the early 1980s. After losing his father in the Falklands war, Shaun finds friendship with a gang of skinheads. But, when a new face appears on the scene, the group's loyalties become divided.

Film: Life is Sweet (1990) – Film4. 11.00pm – 1.05am
Black comedy starring Alison Steadman and Jim Broadbent. An ordinary couple struggle to cope with their own problems as wells those of their grown-up daughters.

A tribute to Patrick McGoohan