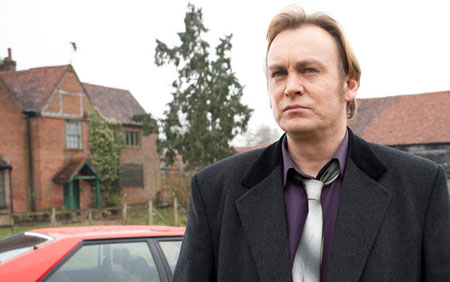 Barry Murphy returns once more to trawl the TV and radio guides (so you don't have to), finding anything worth tuning into this week. All listings are for UK terrestrial TV, Freeview and national radio, with the shows running from Friday 21st May to Thursday 27th May 2010.

So, it's here, the last ever episode of Ashes to Ashes (BBC 1. Friday 21st, 9pm).Tension mounts as DCI Gene Hunt and his team are investigating a diamond heist following the murder of three London gang members. But DI Alex Drake is distracted and, with encouragement from DCI Jim Keats, she decides to pursue her own investigation to the bitter end – did Gene Hunt murder Sam Tyler? When Gene discovers that Alex has gone, he races after her leaving Ray Carling, Chris Skelton and Shaz Granger to plan an ambitious sting operation. As Gene desperately tries to reach Alex before she discovers the truth, Chris, Shaz and Ray's world completely falls apart. It's time for Alex and the rest of the team to find out the truth about Gene Hunt…

Also on television this week Alan Yentob tells the story of the recording of the Rolling Stones' 1972 album Exile on Main Street in The Stones in Exile: an Imagine Special (Sunday 23rd, 10.25pm).Facing huge unpaid tax bills in Britain, the band fled to the French Riviera. Life was crazy and chaotic there, yet the band still managed to make one of the seminal albums of rock and roll history.

On to this weeks radio, and as part of Radio 2's season marking the 50th anniversary of the start of the 60s Brian Matthew presents They Ain't Heavy, They're the Hollies (Wednesday 26th, 10pm) the first of a two part profile on The Hollies, a group formed nearly fifty years ago but still very active today. During their 60s heyday, they were one of the most prolific chart acts in the UK and matched this with American success to rival The Beatles, Rolling Stones, The Dave Clark Five and Herman's Hermits.

The programme features specially recorded interviews with Allan Clarke, Graham Nash and Bernie Calvert as well as Tony Hicks and Bobby Elliott, both of whom are fast approaching their sixth decade in the group. Part one of this profile, which includes both their hits and some rare recordings, looks at the early days of the band leading to the departure of Graham Nash.

Ashes to Ashes (8/8) – BBC 1. 9.00pm – 10.00pm
Series three. New. DCI Gene Hunt and his team investigate a diamond heist following the murder of three London gang members. But DCI Alex Drake is distracted and, encouraged by DCI Jim Keats, she decides to pursue her own investigation to the bitter end – did Gene Hunt murder Sam Tyler?

Film: The Enforcer (1976) – ITV 1. 10.35pm – 12.25am
Tough crime thriller starring Clint Eastwood. When his partner is killed, "Dirty" Harry Callahan is reluctantly teamed with female police officer Kate Moore. During their first assignment, they go in pursuit of a terrorist organisation that has kidnapped the mayor of San Francisco.

I'm in a Rock 'n' Roll Band! (3/6) – BBC 2. 1.20am – 2.20am
The Drummer. The series analysing the chemistry of a rock group attempts to find out what makes a drummer tick. They are the person in shadow at the back and frequently the butt of jokes, but they're also the crucial engine of the band, and often the most likely to go off the rails! Contributions are from Queen's Roger Taylor, Stewart Copeland of the Police and Red Hot Chilli Pepper Chad Smith. Narrated by Mark Radcliffe.

Film: Blues Brothers 2000 (1998) – ITV 4. 3.25pm – 5.50pm
Elwood looks for new band members after the loss of his brother Jake. Apparently conceived more as 'tribute' to the original rather than a sequel, once you can get past the absence of the late John Belushi, lack of plot and that 'bloody' kid, the music soundtrack at least has some redeeming features. Featuring a huge supporting cast of r 'n' b legends including James Brown, Aretha Franklin, Wilson Pickett, BB King, Eddie Floyd and Sam Moore.

The Wonderful Wizard of Oz: the True Story – BBC 4. 8.00pm – 9.00pm
New. Documentary exploring the career of L Frank Baum, the author whose desire to write an American fairy tale resulted in the creation of the cult film The Wizard of Oz.

I'm in a Rock 'n' Roll Band! (4/6) – BBC 2. 10.00pm – 11.00pm
The Other One. Although the antics of the singer and guitarist often grab the headlines, its sometimes the input of the bass player or keyboardist that helps a band rocket to the top. Duff McKagan of Guns 'n' Roses and Peter Hook of New Order reveal how their bass contributed to their bands, while Ray Manzarek of the Doors explains how his ivory-tinkling made all the difference. Narrated by Mark Radcliffe.

Guitar Heroes at the BBC – BBC 2. 11.30pm – 12.30am
Featuring Status Quo performing Pictures of Matchstick Men and the Who performing Long Live Rock.

Synth Britannia – BBC 4. 11.55pm – 1.25am
An examination of the musical backdrop of the 1980s when synthpop was all the rage, having been popularised by bands including Depeche Mode, Ultavox and Soft Cell. This documentary also studies how this genre influenced the future of electronic music and groups such as Pet Shop Boys and New Order.

Film: Brazil (1985) – BBC 2. 1.35am – 3.50am
Terry Gilliam's Orwellian sci-fi fantasy starring Jonathan Price and Robert De Niro. Sam Lowry's flights of fantasy take him away from the reality of his job. Then a mistake in the system plummets Sam into a nightmare.

Film: The Enigma of Kaspar Hauser (1974) – BBC 2. 3.50am – 5.35am
Period drama based on a true story, directed by Werner Herzog. In 19th-century Germany, the inhabitants of a village are disturbed by the arrival of a youngster, who begins to display remarkable talents. In German with subtitles.

Film: A Kid for Two Farthings (1955) – Film4. 3.05pm – 4.50pm
An imaginative young boy growing up in London's impoverished East End in the 1950s, absorbs a tale about the magical power of captured unicorns from the kindly tailor Kandinsky and goes in search of the mythic beast.

Modern Masters (4/4) – BBC 1. 9.00pm – 10.00pm
Salvador Dali remains one of the art world's most controversial figures but was he also one of its greatest geniuses? His dreamscapes are among some of the world's most famous paintings, but he was also an
artist with brilliant technical abilities. Presenter Alastair Sooke traces the life and work of the surrealist exponent.

The Stones in Exile: an Imagine Special – BBC 1. 10.25pm – 11.30pm
Alan Yentob tells the story of the recording of the Rolling Stones' seminal 1972 album Exile on Main Street as band members also share memories of the time they spent on the French Riviera.

Rolling Stones: a Bigger Bang – BBC 1. 11.30pm – 12.35am
The British rock band perform their hits before an audience of one and a half million fans on Rio de Janeiro's Copacabana beach in 2006.

Neil Young – Don't be Denied – BBC 4. 12.30am – 1.30am
Tracing the musical journey of the legendary singer/songwriter through interviews and unseen performance footage.

Film: Too Many Crooks (1958) – BBC 2. 11.05am – 12.30pm
Slapstick comedy starring Terry-Thomas. A gang of inept criminals attempt to carry out the perfect kidnapping, but they grab the wrong person.

Film: The League of Gentlemen (1960) – Film4. 4.40pm – 6.55pm
Crime comedy starring Jack Hawkins. Infuriated by his enforced retirement from the army, an ex-officer plans a military experience and a group of old colleagues.

Rising Damp – ITV 3. 7.15pm – 7.50pm
Ruth talks her cantankerous landlord Rigsby into renting his newly vacated room to a friend of hers.

Filth: the Mary Whitehouse Story – BBC 2. 9.00pm – 10.30pm
Feature-length drama, based on first-hand documented accounts, starring Julie Walters as the Midlands housewife and teacher who, in 1963, embarked on a mission to clean up British TV. Her crusade led her into conflict with the man she felt responsible for a tide of "filth" – Sir Hugh Carleton Greene, director-general of the BBC – culminating in a bitter fight over whether to broadcast the word "knickers" in the Beatles song I Am the Walrus.

Afternoon Play: Lennon: a Week in the Life – BBC Radio 4. 2.15pm – 3.00pm
By Dick Clement and Ian La Frenais. When only 40 people turn up for John Lennon's memorial service in Liverpool, his old friend and promoter Sam Leach is forced to act. The drama combines news stories and interviews from the time with the fictional stories of two lost people.

Payola, the Pluggers and the Father of Rock 'n' Roll – BBC Radio 4. 11.30pm – 12Midnight
Nick Barraclough tells the story of DJ Alan Freed, who was an early champion of rock 'n' roll until the so-called payola scandal.

Film: Doctor in Clover (1966) – Film4. 2.50pm – 4.55pm
Leslie Phillips chases after pretty nurses in this mid-60s entry to the Doctor series, which owes more than a little to the Carry On films.

Flight of the Conchords – BBC 4. 10.00pm – 10.30pm
Series two. Jermaine and Bret fall in love with the same girl, and compete to see which of them will secure her affections.

I'm in a Rock 'n' Roll Band! (4/6) – BBC 2. 11.20pm – 12.20am
The Other One. Although the antics of the singer and guitarist often grab the headlines, its sometimes the input of the bass player or keyboardist that helps a band rocket to the top. Duff McKagan of Guns 'n' Roses and Peter Hook of New Order reveal how their bass contributed to their bands, while Ray Manzarek of the Doors explains how his ivory-tinkling made all the difference. Narrated by Mark Radcliffe.

The Wonderful Wizard of Oz: the True Story – 7.30pm – 8.00pm
Documentary exploring the career of L Frank Baum, the author whose desire to write an American fairy tale resulted in the creation of the cult film The Wizard of Oz.

Flight of the Conchords – BBC 4. 10.30pm – 11.00pm
Series two. Murray tries to arrange a meeting with the US president for the Prime Minister of New Zealand.

The Shuttleworths (3/6) – BBC Radio 4. 11.00pm – 11.15pm
A Gig with Billy Joel – John refuses his agent Ken's offer of an unpaid concert in a remote village hall – but the promise of a personal parking space makes him reconsider. Written and performed by Graham Fellows.

The Wonderful World of the Flexidisc – BBC Radio 4. 11.30am – 12Mid-day
First developed in the 1930s to play at 78rpm, by the 1960s, seven-inch, 45rpm flexidiscs were so cheap to produce, and so light and bendy, they were often given away free with magazines. In tracing the story of this phenomenon, presenter Paul Bayley meets collector Jez Randall, journalist Ian Shirley, and novelist Tim Loft, who co-foundered Flexipop magazine in the early 1980s. The programme includes excepts from flexidiscs galore, including not only music but also adverts for products as diverse as crisps, hair pieces and rat poison.