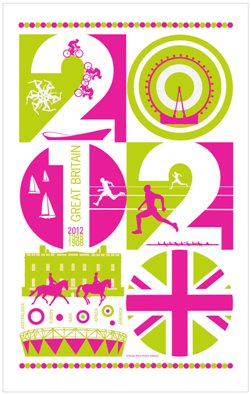 As the London 2012 Olympics are still to come, they aren’t something that would normally feature here, but Maria Dahlgren’s Limited Edition 2012 Tea Towel is decidedly retro in its style if not its subject matter.

The design is typical of the work by the Swedish graphic designer (we’ve shown her city-inspired designs here before). It uses just two colours on the white tea towel background and yet manages to depict a lot. It shows the rowing, horse riding and sailing and cycling (the sports Britain is best at) along with the London Eye and flag. The design certainly a lot better designed than any of the official logos and merchandise for the Games.

It costs £12 by Cloudberry Living.