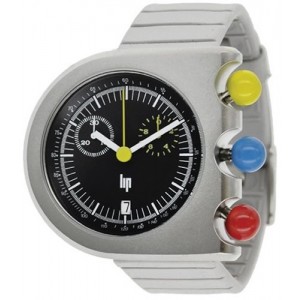 The Mach 2000 Chronograph watch was designed for LIP in 1973 by French industrial designer Roger Tallon and is their most popular watch ever.

It was re-released a couple of years ago when the company launched in the USA. The design was considered cutting edge back in the Seventies, but now exudes a retro futuristic cool. The most distinctive feature is the brightly coloured balls on the side which operate the stop watch function. It is available in either silver (Light Master) and black (Dark Master) and costs £290.