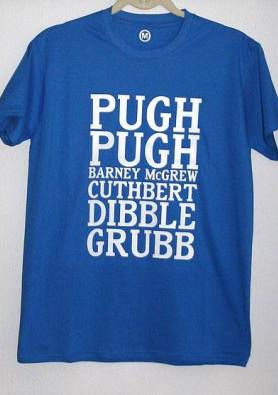 In a similar style to those band t-shirt that list the members by surname is this Trumpton Firemen T-shirt.

The beloved children's television series was originally aired in 1967, but it continued to be popular with children in the next two decades.  And although there were only 13 episodes made, that roll call of names will be instantly recognisable to anyone who grew up watching the delightful stop-animation show. The tribute t-shirt has been designed by Rael & Pappie who specialise in pop culture t-shirts. It is available in bothe men's and ladies sizes from small up to extra large and in a choice of colours; blue, black or purple with white text or orange with black text.

Buy the t-shirt for £22 via Not on the High Street.