There are plenty of card options out there, but none quite like these alternative music Christmas cards by Piper Gates Design.

They are the work of Piper Gates Design, a name that might be familiar to you from past endeavours such as the Morrissey paper dolls and The Prisoner posters plus the Syd Barrett and Joy Division colouring books to name just a few of their projects.

All worth checking out, but as we are fast approaching the festive season, it’s probably better that we focus on these rather eye-catching cards. Especially if you have a post to catch. The deadline creeps up on you quicker than you imagine.

Take your pick of a range of alternative acts from the likes of The Stooges and Kraftwerk to later greats such as Paul Weller, The Smiths, The Cure, The Jesus and Mary Chain, The Fall, Siouxsie and the Banshees and The Stone Roses. If you want to go back even further, you can even get a card featuring The Small Faces. But do check out the full range at the site, which does include a couple of new designs this year, such as The Jam and Serge Gainsbourg for example.

All feature the unique illustrated versions of the acts, courtesy of Piper Gates Design and all have a consistent design, one that is based on the classic Penguin Books look of the mid-20th century. Timeless.

The cards are A5 (210mm x 148mm) in size folded and only available for a limited time. Then again, you probably wouldn’t want one after 25th December in reality. Unless you really like to shop early for the year after.

They are sold individually and are priced at £2.99 each. Ok, a card with a snow scene might be cheaper, but sending one of these to a music-loving friend will guarantee a place at the front of the mantelpiece and probably show what a hip friend you are too. It’s your choice.

Find out more at Piper Gates Design at the eBay website 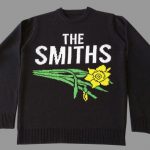