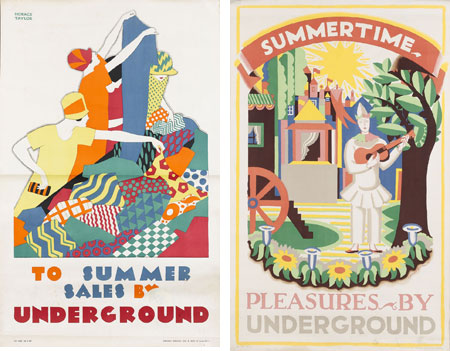 Bonhams have some rare and unusual art up for auction in May – a collection of vintage London Underground posters from the 1920s and 1930s.

They come from a private collection of 350 travel posters, hidden away for decades and featuring some of the most influential poster artists of the day, including Edward McKnight Kauffer, Frederick Herrick, Edward Bawden, Austin Cooper, Rex Whistler and Charles Pears. All are "seasonal" posters suggesting ways to spend your pre-war cash in the capital.

They’re very much of their era, but at the same time, some still look incredibly contemporary. Prices vary according to the poster. The posters featured above are To Summer Sales by Underground (1926) by Horace Taylor, which is expected to sell for £800 – 1,200 and Summertime Pleasures by Underground (1925) by Edward McKnight Kauffer, which could be yours for £500-700. But some estimates are as low as £100.