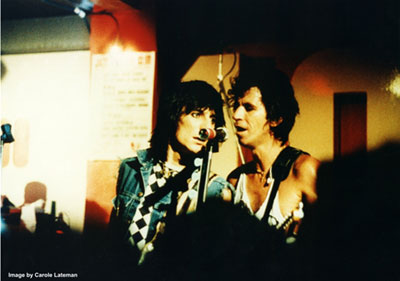 For three days, the 100 Club will open its doors through the afternoons to the public, offering you the chance to see the legendary club, as well as an exhibition of photographs featuring acts who have appeared at the club over the last 60 years.

Photographs from the club, spanning the last 60 years will include Jazz and Blues by Walter Hanlon, Terry Cryer and Chas McDevitt, The Punk Festival of 1976 shot by Barry Plummer, Ray Stevenson and Jill Furmanovsky and Rock and Indie acts by Paul Slattery, Dean Chalkley and Ross Halfin. That includes the likes of The Sex Pistols, The Clash, Siouxsie Sioux, Metallica, Oasis, Humphrey Lyttelton, Gallows, Chuck Berry, The Damned, Primal Scream and The Horrors to name just a few.

An exclusive preview takes place on Wednesday 7th May from 6:30pm – contact the club for details. The main public viewing runs from Friday 9th May – Sunday 11th May, 12pm – 4pm. Entry is free.