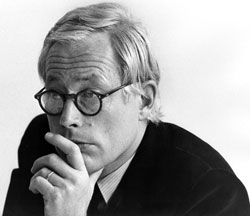 Now here’s a rare treat – one of the godfathers of 20th century design is doing a ‘meet and greet’ at London’s V&A – Less, but Better with Dieter Rams.

We’ve featured numerous Dieter Rams products in the past, including the SK 55 stereo, the Vitsoe 620 chair and the Braun RT-20 radio. And he’s been widely acknowledged as the inspiration behind the majority of Apple’s designs.

Now in his late 70s, the designer will be discussing his ‘design ethos’ and ideas on the future of design. I suspect a few people in the field will be on the front row taking notes. The session takes place at the V&A’s Lecture Theatre on Friday 20th February 2009, admission is £8.