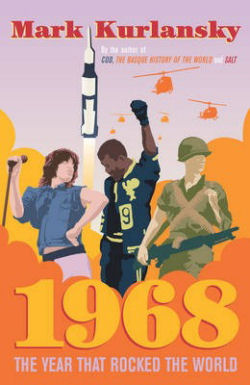 If you are interested in the political movements of the 1960s, then “1968: The Year that Rocked the World” by Mark Kurlansky is a good place to start for a global overview.

Obviously it focuses on the major events of the title year including the assassination of Martin Luther King and Bobby Kennedy, Prague Spring, the Tet Offensive and the student riots in Paris, but it does put these in the wider context what had led to there, and the future impact of these events.

It is quite a weighty tome, with the text only broken up with the occasional photograph and there is not as much on culture (music, film etc) as the blurb would led you to believe. Nonetheless it is an interesting read and the serious parts are alleviated by the antics of Abbie Hoffman and the Yippies.

It is of course available from Amazon (currently priced £6.99 or cheaper from sellers), or if you happen to be near one of the few remaining Fopp record shops, they are selling it for just £2.

Make Do and Mend reprint from Imperial War Museum