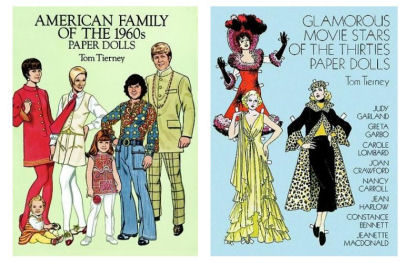 Tom Tierney has had a successful career as an illustrator but his real success has been as the creator of an astounding range of paper dolls.
Back in 1975, looking for a unique gift for his mother, he remembered her collection of paper dolls and her love of 1930s film stars, so decided to make a set of dolls for her. His mother showed the dolls to her friends and from that his first book of dolls was published in 1976. Then from 1978, he has been producing further series of paper doll books for Dover Publishing which celebrates the memorable fashions of various eras as well as its stars.
A wide selection of these charming books are available on Amazon, including Glamorous Movie Stars of the Thirties, Rock and Pop Star of the Sixties and Great Fashion Designs of the Seventies, with prices around the £5 mark. A selection of books signed by Tom Tierney, including his American Families series are available to buy from Ebay via Tom Tierney’s website.

100 Ways to Happy Chic Your Life by Jonathan Adler