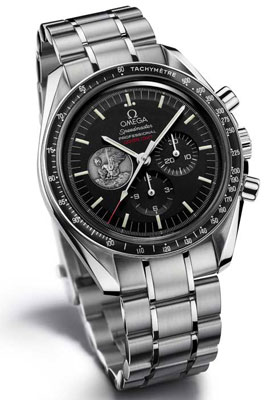 The Omega Speedmaster watch is over 50 years old, but this version celebrates something from 40 years ago – the Moon Landing on 21st July 1969.

Described as 'the first and only watch worn on the moon', this Speedmaster packs a similar, but updated mechanism to the 1960s version, as well as offering a stainless steel case body, a stainless steel bracelet (now with Omega's patented screw and pin system), a medallion featuring an adaptation of Apollo 11’s famous mission patch and on the dial, '02:56 GMT' – the exact time that Neil Armstrong made his “one small step” onto the Moon.

The Apollo 11 'Eagle' mission patch is also stamped on the caseback along with the words 'the first watch worn on the Moon” and a limited edition number (7969 made in keeping with the original date). Price? We've not actually seen a price as yet, but would guess around the £2,000 mark.