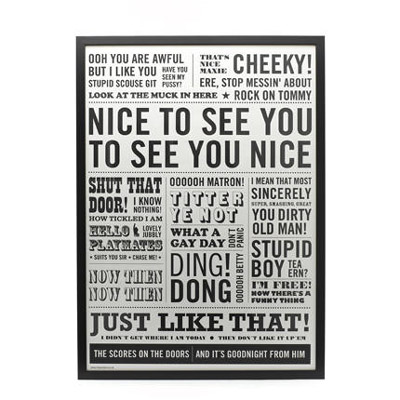 Created by the small design company Ink Prints, the Catchphrase Print consists of nothing but well-known catchphrases from British television shows of yesteryear.

Central is Bruce Forsyth’s Play Your Cards Right catchphrase, “Nice to See You to See You Nice”. Other gameshow phrases are included alongside catchphrases from sitcoms including Are You Being Served, Reginald Perrin and Steptoe and Son and from comedians like Tommy Cooper and the Two Ronnies. The print is great for fans of classic British television, with it being fun to see how many you can identify. Further visual interest is added to the design by its use of a variety of different typefaces.

The print is sold framed priced £165 in a choice of either a black or white frame. Buy it online from Pedlars.

The Banjowl print from Iota Illustration