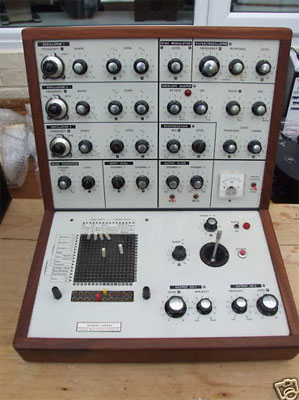 A long title, but for lovers of old British sci-fi, John Baker's EMS VCS3 synthesiser from the BBC Radiophonic Workshop could be worth raiding those life savings for.

John Baker was the man behind much of the mad electronic music at the BBC Radiophonic Workshop, used most famously on Dr Who in the 70s. Indeed, the music itself is so popular, it even has two CDs on release packed with it.

But back to the VCS3, which 'looks in good condition', but has been unused since the late 1970s, although it has been in 'dry storage' since it was acquired from John Baker's estate. I think that means 'buyer beware'. Anyway, super rare, much sought-after, packed with history and currently at £3,877 on eBay.