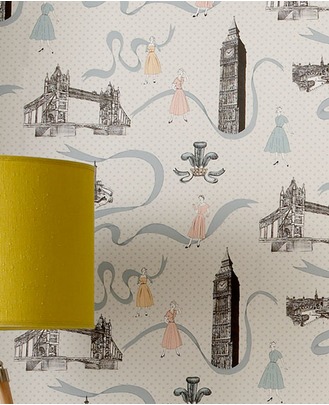 As the name might suggest, Graham & Brown have looked to Britain in the 1950s as inspiration for their new Jubilee wallpaper.

The paper uses a variety of different motifs for its pattern. Images which look as if they could have been taken from a fashion magazine showing elegant pastel-coloured, full-skirted women amidst ribbons contrast with black and white illustrations of London monuments such as Tower Bridge. Throw in some regal plumage and the mix makes for an undeniably British retro look but one that, perhaps thankfully, doesn't rely on Union Jacks to make its point.