Skip to content
55shares
Note all articles are independently researched and written by myself. However, if you buy via one of the links it may be an affiliate and I may earn a small commission.

They first appeared almost 50 years ago and don’t get reissued too often in the modern era. So make sure you don’t miss out on the latest appearance of the Adidas Athen trainers.

It’s a limited edition reissue that will be exclusive to the Size? retailer both instore and online the latter likely to sell through very, very quickly.

As you might know the shoe was launched back in 1968 as an all-rounder and early City Series design to coincide with the Olympics of that year and as a tribute to the birthplace of the event. So the blue and white colours of Greece, the ‘Athen’ branding on the side and a gum sole.

As we said, it doesn’t often come round and was last seen in 2004, so it isn’t a show to miss. Shelf details are still vague, but it will appear this month, probably priced around the £70 mark. When details are set in stone, we will let you know. 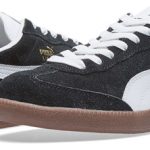