If you want to beat the crowds over the Christmas period, then you might be interested in this 1970s Williams Formula 1 racing car on eBay.

Not that there’s much luggage space. In fact, there isn’t any. This was designed and built for the track and specifically for driver Alan Jones back in 1978. It continued to be used by the team for the next year or two before bang picked up by a ‘wealthy Italian’ for track day meetings. Whenever the car was being used, Frank Williams would send one of his race mechanics to oversea these events.

In 1992 the car was acquired by its present owner, with a brand new Cosworth Engine was built for it and used it in historic formula one racing for numerous years and on two occasions Winning the Championship Class.

So there you have it. An original F1 car on eBay. But you’ll need to have a healthy bank balance to get it. This is up for £1,000,000 on a ‘Buy It Now’. Think carefully before you hit that buy button. 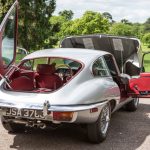