Skip to content
20shares
Note all articles are independently researched and written by myself. However, if you buy via one of the links it may be an affiliate and I may earn a small commission.

It is perhaps best known for its suitcase record players. But the Crosley Gig record player is quite a departure from that.

Actually, it isn’t just known for the suitcase players. Crosley also does a Dansette-style model and one that has a touch of the Dieter Rams about it. Even allowing for those, the Crosley Gig is something new to the range.

The design is one that would certainly fit a midcentury modern setting. In fact, Crosley itself admits that this inspired by furniture from the 1950s and 1960s, not least when it comes to the (faux) wood finish and rounded edges.

But at its heart this is still a record player. Specifically, one with a two-speed manual turntable and four knobs on the front for volume, pitch and other functionality.

The Gig also has a control to switch between vinyl playback and aux-in, with the option of playback via the built-in Bluetooth receiver too, should you have some digital music you want to stream. A spilt and 45rpm adapter is also included here, along with the speakers of course.

Fancy one? The Crosley Gig is new in and available at Amazon. If you like the look of it, the price is £139.95. 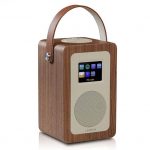