I featured the Auna Belle Epoque audio system some time back. It has now been followed up by the Auna Deerwood stereo system.

This one is a different kind of retro. The last one out had something of a 1960s vibe, but this one is more like the kind of stereo system you might have picked up in the 1970s. Well, in looks anyway. There’s no 8-track or medium wave radio on-board here. Shame really, although using modern inner workings does make this a far more practical player in the 21st century. But it does sneak in a cassette deck. A rare sight and a welcome one considering there’s a revival for cassettes right now.

Outside of that, the maker is packing in pretty much everything you would expect of a modern-era, compact hi-fi system – and a little more besides.

So in all, that includes a belt-driven record player, the side-mounted cassette deck, a USB port for music playback, the option to record anything you play (even the radio) onto a USB stick, a CD player, an FM radio with 10 memory slots, an AUX input for connecting external audio devices such as MP3 or CD players and computers, as well as plenty of other connectivity options. A pair of 2-way bass reflex speakers finishing things off too.

So a retro look and modern-era output and inner workings, as well as some concession for older formats should you want to listen to your old recordings or your vinyl. In terms of the latter, this is probably not the best for spinning expensive vinyl – if that’s what you want, you need to go down the audiophile route. 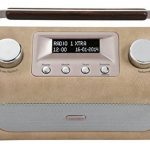