I have featured similar designs in the past, but his handmade retro cassette coffee table by Cambrewood is perhaps the most affordable.

In fact, even more affordable right now as it seems to have had a price drop since I first spotted it a whole back. Bonus.

But there are selling points for this one that the other cassette tables don’t have. For me, anyway.  The main issue for some is that none of those previous table designs were made in the UK and shipping them in would be a costly business. This one is made in the UK, so shipping should be less.Actually, I’ve checked. It ships for free.

Also, this one comes in cheaper than most (if not all) of those designs I mentioned earlier.

It’s a very different proposition to the others too. The previous finds were all about getting a look exactly like a cassette tape, right down to the bumps and ridges of the original cassette and in some cases, with something replicating the ‘tape’ itself. The kind of detail that lovers of retro technology would love.

This coffee table goes some way down that road, but offers more of a functional flat surface, making it a touch more practical in your home.

Another selling point is that each one is handmade from solid wood, with the grain of that wood really jumping out at you. Not all wood though, with the hairpin legs offering support and a tough perspex top protecting the actual design for the longer term. The maker describes it as ‘heavy, solid and built to last’, which sounds about right looking at the photos of this one.

Notice also that the front opens on two strong hinges providing a decent level of storage within the coffee table. Not something you get with those other cassette designs and again, some added practicality. So a striking design but one where practicality isn’t forgetten.

Want one? You can order one of these tables online now, with each one selling for £450 orginally, but now available for a far more appealing £350. That’s comparable to a number of fairly mundane coffee tables on the hugh street – and this is far from that. 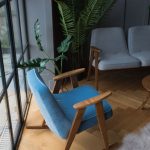