Is “The Empire Strikes Back” the best Star Wars film? Quite probably. It certainly has the most memorable line in the series, perhaps one of the most famous lines in modern cinema.

Graphic designer, Rob Longworth, has made Darth Vaders’ immortal words to Luke Skywalker into a screenprint and a pretty stylish one at that. Originally designed for the film magazine Little White Lies, it has been turned into a limited edition print, entitled ‘I Am Your Father’. Restricted to just 25 copies, each one is numbered and signed by the artist. They cost £40 to UK customers and a little more for overseas buyers and are available from the Little White Lies website.

Apologies if this has ruined the plot of the film for anyone, but it was released 20-something years ago, so you really should have seen it by now. 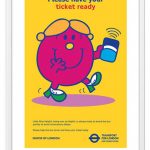