Bennison has been around since 1985, specialising in hand-printed fabrics and wallcoverings based on original 18th/19th Century English and French textiles discovered by Geoffrey Bennison. There’s 150 designs now in the collection, including this recent addition – Waikiki.

The design was discovered in France, dating back to the late 19th century. Although I’m guessing its tropical-style kitsch would probably look like something from the 1950s to most eyes. Which makes it ideal for a look based on that decade, a feature wall or just any room that catches the sun.

This textured hand-made paper certainly doesn’t come cheap though – expect to pay around £130 per metre. 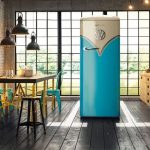