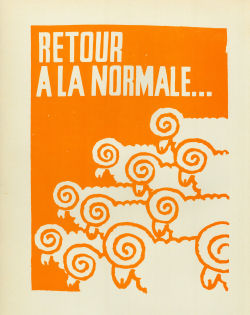 In May, The Hayward Gallery will be hosting an exhibition to jointly commemorate the revolutionary spirit of 1968 and its own 40th birthday. Entitled “May 68: Street Posters from the Paris Rebellion”, the exhibition is the first major display in the UK of posters produced during the strikes in France.

On 16 May students and faculty spontaneously took over the Ecole des Beaux Arts to form the Atelier Populaire, producing hundreds of silkscreen posters that were to be a key weapon in their battle. The brilliant bold graphics forcefully convey the discontent, anger and political struggles of the times.

The exhibition is a ‘must see’ for anyone with an interest in radical politics or social history, as well as graphic design. It is part of All Power to the Imagination! 1968 and Its Legacies, a season of events across London and we will, no doubt, be covering further highlights of this season over the coming weeks.

May 68: Street Posters from the Paris Rebellion runs at The Hayward Project Space, Southbank Centre, London from 1st May to 1 June. Further information can be found on the South Bank Centre website.