The tables were commissioned for the La Fonda del Sol restaurant at New York’s Rockefeller Center and developed in the Eames office in 1961. That resulted in the striking chrome die-cast aluminium legs and Carrara marble top, standing at a height of 65cm and with a diameter of 45cm.

And it is available again, courtesy of Vitra. Price is around £1,254. 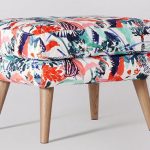