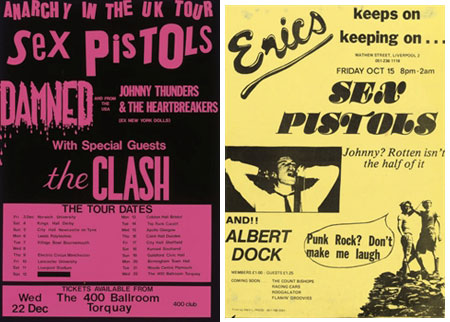 If you’re a fan of rock and pop memorabilia, you need to make a note of July 10th 2008 in your diary – that’s the date of the Popular Culture: Rock and Pop Memorabilia auction at Christies in London.

Covering everything from the 1960s to the present day, you can bid big for items like Paul Weller’s guitar, a Pink Floyd bass or a Led Zeppelin amplifier, not to mention clothes from the likes of Madonna and Elton John. But we like to be a little more realistic – and we’ve picked out two sound investments that aren’t going to break the bank.

Shown here is an original tour poster from the Sex Pistols-headlined Anarchy In The UK Tour (the Torquay show to be precise), along with a flyer for a Sex Pistols show at Eric’s in Liverpool. Both have estimates around the £400 mark, which sounds a lot – but you can see these going up and up as the years pass. Check out these and all the other lots at the link below.

The Smiths Albums as Book Covers prints by StandardDesigns