A lovely location and a lovely property too. This 1960s architect-designed house in Ansty, Dorset is on the market.

It isn’t just about the named architect either. The house, found in Ansty on the Dorset / Wiltshire border, was built in 1962 by Arup to the designs of David Levitt. However, Alison and Peter Smithson made later additions to the property, which contributed to this being one of the most significant modernist home in the UK.

It sits on the side of what is described as a ‘small, green valley’, one that overlooks a lake and a 13th century church. Idyllic is definitely the appropriate word here. That location is also the reason why this one is quite an unknown property too, rarely featured as much as other comparable buildings.

According to the agent, some ‘minor improvements’ have been made to the interior in the fairly recent past, which includes the addition of double-glazed windows. Can’t really blame the seller for that when you think of English winters.

But the ‘original quality and character’ of this 1960s gem is still very much intact. Check out the beams, the exposed brick, the walls of glass, the gallery areas and so much more. Hopefully the images give a good impression of just what this one is about.

As for space, you get the main house (with two bedroom areas), a summerhouse designed by Alison and Peter Smithson, a double garage and what is described as an ‘attractive garden and terraces’. Around a third of an acre in total

There is also planning permission to build a large annex to the summerhouse, with toilet and shower/WC, as well as further bedroom accommodation.

Oh and did I mention that the house has its own archive at the V&A? It does indeed. Suddenly the £800,000 doesn’t seem quite so out of the question.

If you want more interesting modernist and architect-designed houses for sale, please do check out our WowHaus website. 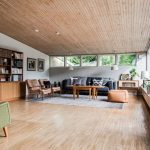 Catch-up: 10 retro properties you might have missed on WowHaus 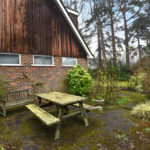