Last year saw the release of the Eames Plywood Elephant from Vitra, which was designed in 1945, but never actually commercially issued. Just 1,000 were issued in 2007, all selling (and selling out) for £1,000. If you missed out on that, there’s a new Vitra Eames Elephant on the market for 2008 – and it’s cheaper.

The new version uses polypropylene instead of plywood, but keeps the same shape and dimensions. It’s ideal for a kids bedroom (it was originally intended as a toy) or as an eye-catching piece of home design in any room. And as it’s now made of plastic, you can even use it in the garden. 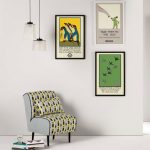 Tufnell vintage-style light fittings by Made