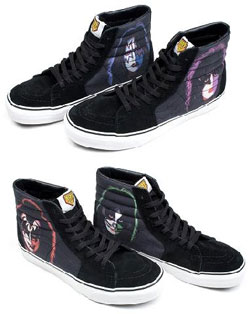 Rock legends Kiss released solo albums from each band member on September 18th 1978 – and in that same year, Vans launched the Sk8-Hi shoe. So it seems sensible to release a collaboration to celebrate the 30th anniversary – the Vans X Kiss Sk8-Hi shoe.

The release of the four solo albums was the first (and possibly only) time that a band has released solo albums on the same day – and the covers of those albums, with each member in full make-up, is the design on the new Sk8-Hi shoe.

Strictly for fans of both shoe and group I’d guess, you can pick up a pair in the coming weeks for an as-yet undisclosed price.