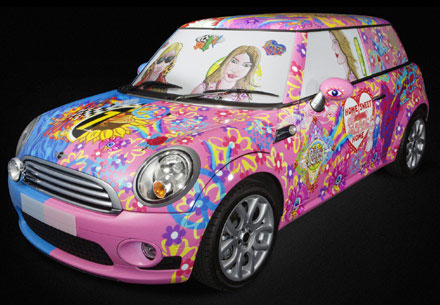 We featured the Alan Aldridge exhibition at the Design Museum previously, but we’ve just discovered one of the purpose-built exhibits – this Alan Aldridge-designed Mini One.

It’s a re-creation of a classic cover of the Sunday Times Magazine from 1965, but instead of a 1960s model, the design has now been transferred to the modern-day Mini One (as well as last weekend’s Sunday Times magazine). The design itself is split over the sides of the car – driver’s side male, passenger’s side female.

You can check it for real at The Man with Kaleidoscope Eyes exhibition, which runs at the Design Museum until 25 January 2009. No word on a variation of the design being offered commercially – although it would certainly shift a few units.

John Richardson’s maps from Caught by the River