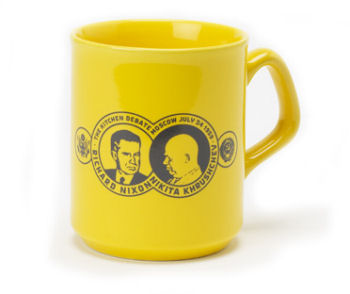 The Kitchen Debate was a groundbreaking discussion between Vice President Richard Nixon and Soviet Premier Nikita Khruschev. It took place in the kitchen of a model house in 1959 and they discussed the merits of their respective political and economic systems.

Inevitably (although with nearly a 50 year gap) the historic event has given rise to an ironic kitchen range, courtesy of the V&A. The range consists of a Kitchen Debate mug, apron and tea towel, each bearing quotations from the landmark meeting.

The mug (£8) features Nixon’s words, "Let’s drink to talking, as long as we are talking we are not fighting" and the tea towel (£5) says “Would it not be better to compete in the relative merits of washing machines than in the strength of rockets” The apron features the appropriate quotation from Khrushchev “we do not have the capitalist attitude toward women” and costs £18.

They can all be bought online from the V&A Shop.