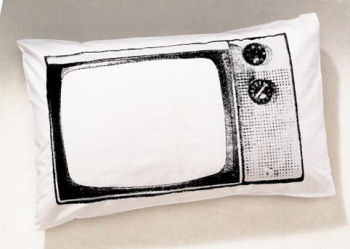 We’ve featured several novelty pillows here in the past, including an 80s ghetto blaster shape pillow, a cassette player shaped one and pillows with a guitar and amp printed on them. Joining this illustrious list, is the “Eight Hours of Fame” pillowcase.

The 100% Egyptian cotton pillowcase has a black and white picture of a retro (possibly 1980s?) television printed on it. It certainly isn’t a modern television set as it control dials rather than the buttons we are accustomed to these days. When you lie down, your head will be in the middle of the television, just as if you were on the screen which is perhaps a better way to appear on television than subjecting yourself to humiliation on a reality TV show.

It costs £25 from Product of Your Environment.