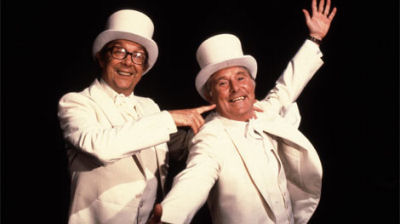 The Mediatheque is the BFI’s digital jukebox of rare and outstanding film and television footage. To celebrate the festive season, Mediatheque has added a selection of Christmas treats from the archive, which they are calling “Santa’s Grotto”.

The programme focuses on classic British Christmas television, in particular the light entertainment specials of the 1970s. These include Tommy Cooper’s Christmas (1973), Cilla (1974), Rod Hull and Emu Sing a Christmas Song (1976), and of course Morecombe and Wise.

None of the selection is available on DVD and it does include some rarities you are unlikely to have come across. Father Christmas Union sounds like a particularly interesting piece, featuring striking Santas, a reminder of just how gloomy things could be in the Seventies.

The service is free and available at the BFI Southbank or at QUAD Derby. Visit the BFI website for further details.

Christmas baubles made from Lego by Bits and Badges