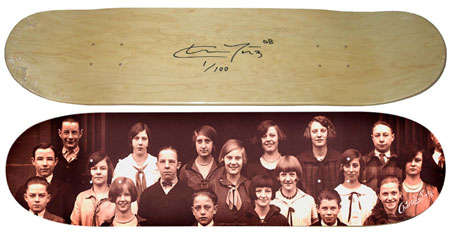 The latest Andy Warhol-related work by Charles Lutz is something very much out of the ordinary – the Andrew Warhola skateboard deck.

Following on from the previous 'Warhol Denied', 'Sold' and 'Stacked' series, this latest limited edition features an old sepia-toned school photo of Warhol. And if you believe the hype, the photo was actually given to the artist by Warhol from beyond the grave.

Yes, apparently Lutz was sent a 'subliminal message' from Warhol, directing him to an antique store in Warhol's hometown of Pittsburgh. Once in there, he found a box of old photos – and within that box was the photo. And now you can have it in your home via the skateboard deck.

The image is a silkscreen enamel on a 100% Canadian Maple skateboard deck, signed, numbered and titled, with a limited run of just 100. You can get one now for $260 from Charles Lutz online or for £170 from Red House Originals in the UK.

Find out more at the Red House Originals website