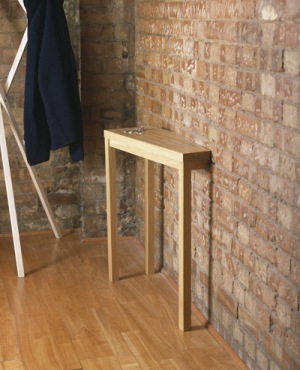 Keith’s Console is described as being “inspired by the rock and roll antics of the legendary Mr. Keith Moon”.

The designer Richard Shed had previously created a piece of shelving “Mr Moon Shelf” based on a story about Keith’s drunken antics, throwing a shelf at a wall (I’m taking this tale with a pinch of salt, knowing the similar story involving a bottle). That product no longer seems to be available but the related console table is still being produced. It has an asymmetric shape so when placed against a wall, it looks as if it is coming out of the wall.

Redford collection from Made