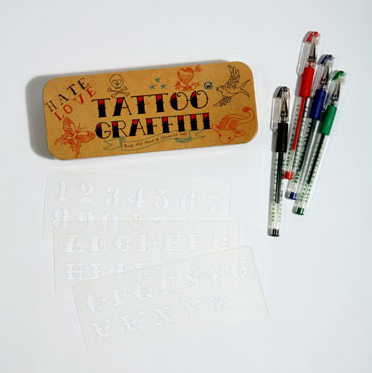 If you've always fancied a 50s rockers-esque tattoo, but couldn't handle the pain or the commitment, you may be interested in this tattoo stencil kit. The kit contains four pens (black, green, red and blue) and three stencils.

Sadly the stencils only include the stylised letters and numbers, rather than some of the more interesting imagery you would also associate with the look. However that's probably because such images require a touch more advanced artistry than that offered by a stencil. I suspect also they would carry a price higher than the kit's £9!

Mondrian Stool from the Courtauld Gallery