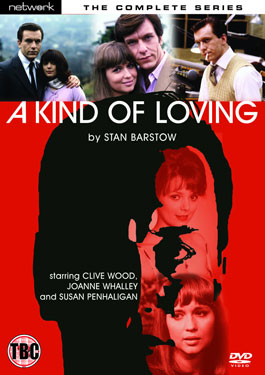 A Kind of Loving is a top-notch novel and a great 1960s kitchensink drama – but I personally didn't know it was also a TV series. But it was – and A Kind Of Loving Complete Series will be on the shelves via Network in August for the very first time.

It apparently dates back to 1982, but is set in 1957, where miner’s son Vic Brown (Clive Wood) meets Ingrid Rothwell (Joanne Whalley), an attractive young typist, in the West Riding of Yorkshire. They begin an relationship, then marry when Ingrid discovers she is pregnant, and move in with Ingrid’s mother. As the banality of marital life starts to take hold, Vic becomes frustrated – stuck in a marriage and 'a kind of loving' for the rest of his days.

Running for 500 minutes and available over three discs, you can pick up a copy from 10th August 2009 (or pre-order via the link below), priced officially at £29.99, but available from Amazon for £18.

Get Carter car park in Gateshead to be demolished next week