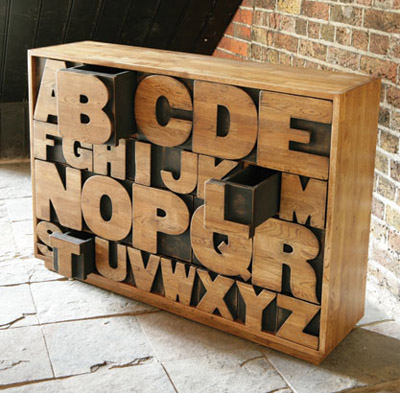 These alphabet drawers aren't influenced directly by any era or designer but do draw their inspiration from old printing blocks. Made to order from solid oak by Kent and London, each letter of the alphabet has its own drawer, so there are 26 drawers of various sizes.

It's a very tactile piece that does seem to encourage you to run your hands over the relief of its letters and creates an urge to take out and starting inking up the drawers. Two slight problems with this though. First, the print of any of these letters would of course be back-to-front and secondly, also the price might put you off: at £2700 it's an investment for the future, rather than a customisation project.

One thought on “Kent and London alphabet drawers”