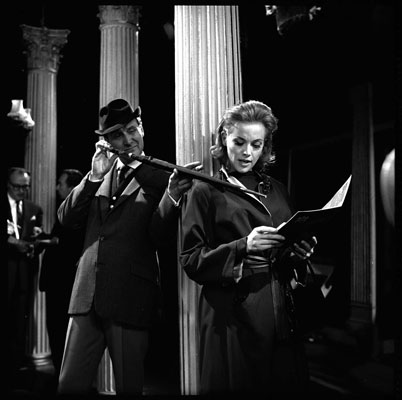 Sadly, not everything has survived, but the remaining episodes of the first series of The Avengers, along with the second series, are about to get a DVD reissue, courtesy of Optimum.

Just two and a half first series episodes survive, but thankfully all of series 2 is still around, all fully restored (for the first time) and of course with Patrick Macnee playing Steed, Honor Blackman doing the partner thing as Catherine/Cathy Gale. The entire eight-disc set has a running time of 1,520 minutes, augmented by extras including a 132-page book covering series one, a series one scrapbook, scripts, materials, stills, promotional brochures, audio commentaries and an Honor Blackman interview – most of that new for this release.

Look out for this from 5th October 2009, priced 'officially' at £79.99, but certain to be discounted in the Christmas run-up (it's already around £57 on Amazon for pre-order).

Network to reissue David Bailey On Warhol documentary on DVD