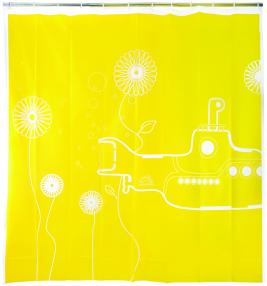 The curtain has been designed by Dutch designer Jan Habraken rather than using illustrations from the Beatles film, but the design is similar enough for the reference to be obvious. The submarine along with some psychedelic flowers are drawn in white outline against the yellow shower curtain.  Perhaps a design featuring an Octopus' Garden will follow?