Our shout out for some Retro Rooms got an instant response, including this rather tasty image from Simon Donald.

This is the kitchen from Simon's former house, which was originally fitted in Newcastle on Tyne in 1962 by Danitymaid of Tipton. Rather than doing the usual thing of ripping it out and replacing with something faceless from a DIY warehouse, Simon renovated it back in the 1990s, keeping everything as original as possible. The effort, as you can see from the photo, was well worth it.

Many thanks to Simon for sending it in and if you've got a Retro Room (or Rooms) you want featuring on the site, get in touch with us. 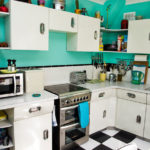