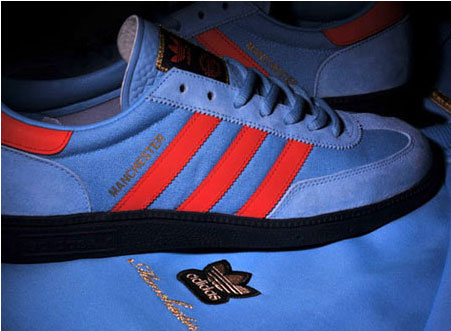 As some of you might recall, the retailer Size? is selling classic, limited edition Adidas Manchester trainers and tracktops for its 10th anniversary, some of which were sold instores over the weekend, the rest being sold online this morning.

If, like me, you were one of the people trying to buy some, you'll probably have found a frustrating and in the end, almost shambolic procedure. Being informed there was no stock at the end of the billing procedure (after previously securing some online), even getting a cancellation email after an order was confirmed. Not good at all.

But where there's demand, there is always supply – and a number of the lucky few have decided to stick their (not very) prized possessions straight onto the eBay website. So if you have money to spare, sellers are already asking anything between £100 and £300 for a pair of the £69.99 trainers. Yes, really. If you want to browse what's currrently there, follow our link to the trainers currently being sold.