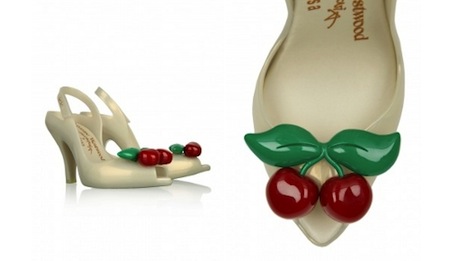 Since making her mark in the 1970s, Vivienne Westwood's designs have continued to innovate and inspire. A new display at London's Selfridges - Vivienne Westwood Shoes, An Exhibition 1973 – 2010 – celebrates her contribution to the world of footwear.

The display is situated in the store's Ultralounge and will contain almost 200 pairs of shoes. It'll include the now iconic pirate boot, dating from the 80s and her rocking horse shoes, as well as the platforms in the style that famously caused Naomi Campbell to take a tumble on the catwalk that time. It'll be brought up-to-date with her recent collaboration with Melissa (pictured), shoes that owe more than a passing nod to retro influences.

The exhibition runs from 26 August until 22 September.

One thought on “Vivienne Westwood shoe retrospective at Selfridges”