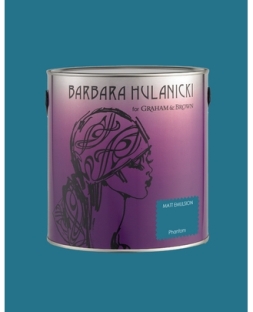 Obsessive fans of Barbara Hulanicki’s work might be interested to know that as well as the wallpaper we’ve mentioned in the past, she has also created a range of paints for Graham and Brown.

As you would expect from the Biba founder, the Barbara Hulanicki Matt Emulsion colours tend towards the bold and dramatic with several shades of purple amongst the 24 options. Obviously once it is on your walls, the designer won’t be apparent, but the paint does come in a pot with Hulanicki’s signature design on the front.