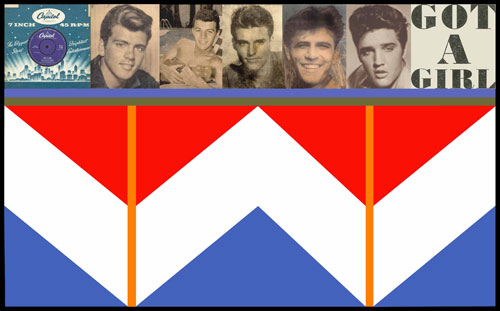 A regular around the capital, Sir Peter Blake is seen much less 'up north'. So the Sir Peter Blake Twenty Years of Printmaking exhibition in Harrogate, Yorkshire is well worth an entry in your diary if that's where you live.

It takes place at the RedHouse Originals Gallery, 15 Cheltenham Mount, Harrogate from 12th March – 10th April, with previews on Friday 11th March. Sir Peter will be there for that to open the exhibition, as will the double decker CCA Art Bus with Blake exterior. There will also be the unveiling of a new portrait and print edition called Boogie For Stu, featuring Ian Stewart, the legendary keyboardist and co-founder of The Rolling Stones.

Aside from that, there will be selection of prints available to view and buy, including some of the rarest and most sought after original and limited edition prints Blake has produced. Highlights include the artist’s portraits of Elvis Presley, Marilyn Monroe and his seminal artwork for The Beatles’ 1967 album Sgt Pepper’s Lonely Hearts Club Band.

Note that the Boogie For Stu artwork will be available to pre-order as a limited edition silkscreen print with proceeds going to the British Heart Foundation’s 'Mending Broken Hearts' campaign.

The Best of Jazz Poster

1940s Fashion Illustrations from Our Shop