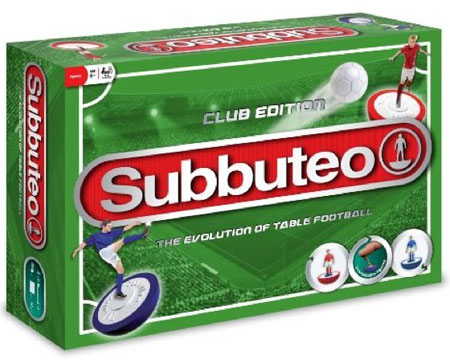 The football game that refuses to due returns once more, in improved form, as the Subbuteo Club Edition 2012.

Yes, the table football game you know, love and possibly grew up with returns once more as an all-new set via Paul Lamond Games. According to the pre-publicity blurb, the set has been 're-energised' with 'greatly improved detail'. On the face of it, that means stronger and more flexible players (no snapping if you put your foot in the wrong place), a new 'luxury' playing pitch, improved player detailing and better bases, which make it easier to move the players in a straight line.

There's also a new and extended range of colour strips as well as England, Scotland and Ireland national teams, plus fully licensed Premiership Club Subbuteo teams. Sadly, looks like less lower league teams though, so don't expect Carlisle United on the shelves this time. At least, not at launch.

The new Subbuteo table football set is available to pre-order from Amazon now for £39.95 and will be on the shelves in March 2012. If you can't wait that long, there are plenty of vintage sets and teams to be found on eBay.