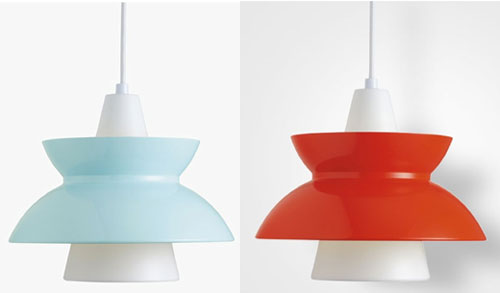 It hasn't been available to buy since the 1980s, so the return of the midcentury-style Doo Wop pendant light by Louis Poulsen is big news.

The light was originally produced in the 1950s, designed by Louis Poulsen in close collaboration with the Navy Buildings Department. It was used for many years in a wide variety of Royal Danish Navy premises and became known as the 'Navy Pendant'.

Demand for vintage models has resulted in this reissue, with the light available in a variety of colours, as well as a premium version made of brass. The lights are still made in the traditional way though, with the shades turned by hand before being bent up slightly at the edge to give them their special 'optical volume'.

Doo Wop is available in red/orange, pale blue, green, white, black/grey and that brass version. £250 is the price.