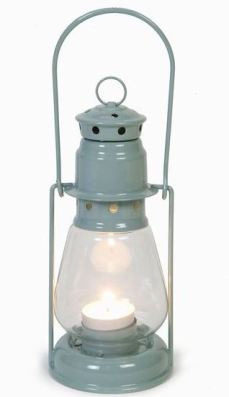 Based on a design from the 19th century, this Miners Lantern can bring light to your home or garden the old fashioned way.

My grandfather was a miner (a bit later than the 19th century I might add) but I'm not sure he ever had a lantern as attractive as this one.  Whilst the shape is very much in the traditional style, its powder-coated finish in shutter blue makes it more decorative than the real thing ever was. The light is provided by adding a tea light inside the lantern.

It costs £10 from Illustrated Living.

If you want a modern take on the same look, check out the John Lewis LED traditional lantern, which replaces the candle with electricity.